Skip to main navigation
Article from the issue: 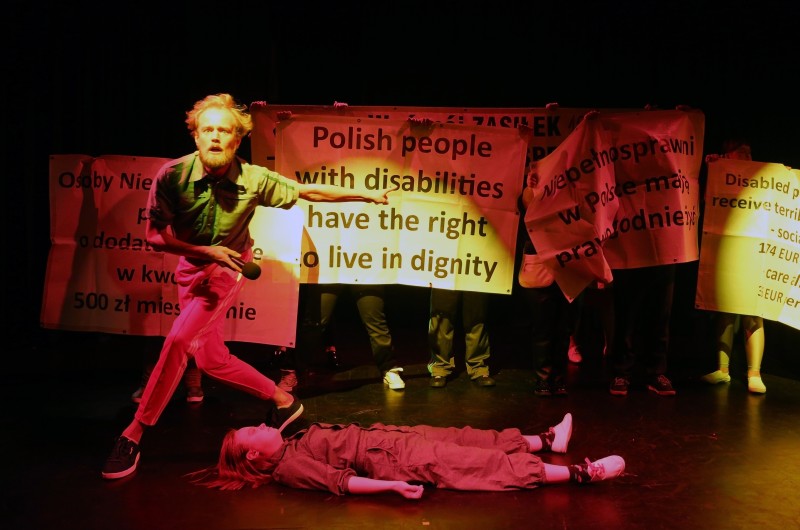 The below essay is the programme document of the research project Porozumienie [Agreement] at the Powszechny Theatre in Warsaw.

The shape of public cultural institutions has long attracted spirited debate. The theme was one of the pillars of the first Forum for the Future of Culture held on 18‒19 November 2017 in Warsaw. In order to obtain the knowledge needed to assess the direction in which the debates should move, the Forum invited a team headed by Agata Adamiecka-Sitek and Mikołaj Lewicki to undertake a study focused, among other things, on cultural institutions. As the authors note in the study’s summary, “[…] the quality of social space must be recognized as the paramount ‘project’ of an institution and, at the same time, as the crucial transformative force vis-à-vis the existing order; the quality of relations, work on values and the universe of participants’ experiences become more important than existing norms in the field (e.g. artistry for art)” (Adamiecka-Sitek and Lewicki, 2017:71).

This means that a cultural institution co-creates its social environment primarily by practicing internal relations and relations with its collaborators and audiences. An institution dominated by hierarchical relationships, authority enforcement and dismissal of other voices produce a culture that transmits these abusive values and contributes to establishing a society founded on them. If we want a community based on empathy, solidarity, and equality, we must strive to create a culture based on these practices and values. This will only be possible in a cultural institution’s environment if the institution itself has been shaped by empathy, solidarity, and equality. But how to achieve this?

Adamiecka and Lewicki argue that “it remains vital to democratize institutional management processes and develop mechanisms of participation and of enhancing the agency of the workforce. All this is essential for untrammelled creativity which is not only enshrined in the constitution but also a part of the spectrum of fundamental labour rights of arts professionals. If these conditions are not met, it is impossible to work in the cultural field without experiencing radical alienation” (2017:70). A cultural institution where empathy, solidarity, and equality are practiced is shaped through its democratization, which in turn is closely linked to the fact that each cultural institution is a work environment.

Labour is bound up with democracy, because almost every adult these days has a job and, consequently, the workplace is the primary social environment where we experience power, hierarchy, and alienation. By definition, each employee who seeks to have a say in the managerial decisions that directly affect her is a democratic activist. Therefore, giving more value to the workers’ perspective would constitute the first step in the democratization of cultural institutions, of culture in general, and hence of a society based on empathy, solidarity, and equality. But what does the ‘workers’ perspective’ mean? Who works for public cultural institutions? And why do we choose to use the feminine pronoun (‘her’)?

The answers to two of the above questions seem obvious: those who work for cultural institutions include the institutions’ employees and all its collaborators working on all manner of labour contracts. But there’s more to it. The people and things working for a cultural institution also include its surroundings, audiences and event participants. This work is invisible but brings intangible effects, allowing arts and culture to exist and grow. The effects range from a sense of satisfaction (which inspires artists to keep on working) to greater prestige (which enables them to undertake new projects) to legitimizing programmes created by institutions (which is essential to maintaining the continuity of artistic culture and institutional order that provides an environment where artistic culture is created). Thus, giving more value to the workers’ perspective in the decision-making processes of a cultural institution also means bolstering the social side, i.e. the socialization of an institution. It also allows to forgo a widespread mechanism that seems to be the greatest headache of repertory theatres: the mismatch between the declared democratic principles and the practice of production and work organization. Stopping the democratization process at well-crafted agendas is perhaps the central problem of today’s theatre which would like to see itself as critical theatre.

At the same time, the generation of intangible assets, which fuel the production of material resources, is defined as reproductive labour and seen as the foundation for productive work. The notion of reproductive labour, in turn, refers directly to the ‘feminization’ of labour, life, and politics, hence in our study we use the feminine pronoun when referring to the ‘worker’.

This understanding of ‘feminization’, derived from direct observation of city life, originated in the milieu of Spanish urban activists. Owing to the still-dominant collective perception of social roles, women are the principal users of the city ‒ they move around with prams, use public transport, look after children and the elderly, and shop more often than men. In order to develop a city for the benefit of the well-being of its inhabitants, the way women use it should be taken as a yardstick to measure life quality, and women’s expertise should be accepted as the most valuable in this respect.

At a later step, feminization came to mean using values associated with femininity as a starting point for efforts to effect political and social change. Barcelona en Comú activists Laura Roth and Kate Shea Baird argue that “the feminization of politics, beyond its concern for increasing the presence of women in decision-making spaces and implementing public policies to promote gender equality, is about changing the way politics is done. This […] dimension of feminization aims to shatter masculine patterns that reward behaviours such as competition, urgency, hierarchy, and homogeneity, which are less common in — or appealing to — women. Instead, a feminized politics seeks to emphasize the importance of the small, the relational, the everyday, challenging the artificial division between the personal and the political. This is how we can change the underlying dynamics of the system and construct emancipatory alternatives” (Roth and Shea Baird, 2017).

At the same time, it has been noted that activities typically performed by women, which involve care, regeneration, and efforts for the common good, are essential for sustaining life. All of them constitute labour for the benefit of intangible resources that serve to reproduce collective life. Further analyses demonstrate that values and practices created through reproductive labour include solidarity, concern for others, community building and cooperation (Hardt and Negri, 2012:285). Reproductive labour is the foundation of productive work. The latter cannot be performed without the former.

Production and reproduction are at the centre of the debate about the shape of cultural institutions, as public cultural institutions operate under the primacy of productivity and competitiveness, which turns them into competing factories of cultural products and brand prestige. Without reproducing life, however, productivity cannot exist, its powers are being depleted. Feminization, therefore, is about adopting a female perspective as the principal indicator for assessing the quality of life, which, consequently, results in investing reproductive activities with pre-eminence as they are needed to perform production activities; it also means replacing models of social coexistence associated with a masculine attitude with those associated with a feminine stance.

From the issue: English Issue 3
Bibliography

Agata Adamiecka-Sitek and Mikołaj Lewicki, Samoorganizacja w kulturze, a study commissioned by the Forum for the Future of Culture, case studies: Natalia Sarata (Ogniwo Cooperative), Bartek Lis (Audiences of the Polski Theatre and the Polski Theatre in the Underground), workshop with Tomasz Kasprzak, Warsaw, 2017, p. 71, https://bit.ly/2BSLW7R [accessed on 28 August 2018]

Coronatheatre: Polish Theatre In The Plague Year
“I Don’t Know What It Means To Be An Actor”
Mamadou Góo Bâ in conversation with Monika Kwaśniewska