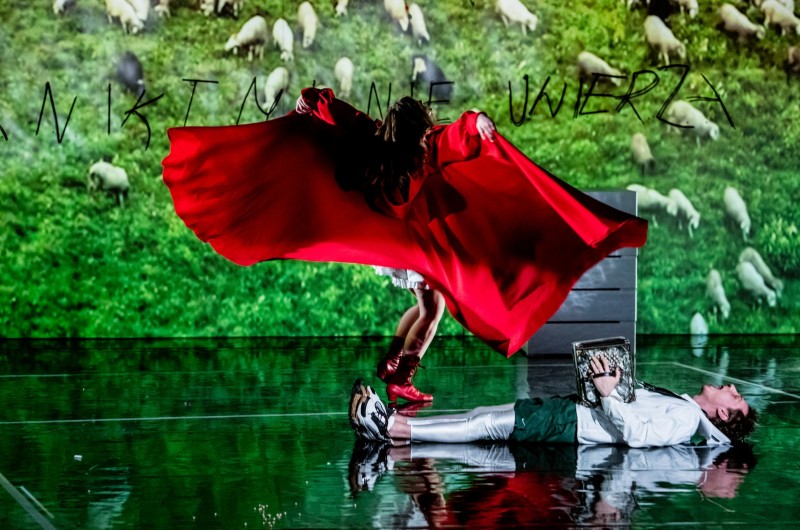 Privileges of the Imagination

When, nearly three years ago, I wrote about the first Teatroteka (Didaskalia. Gazeta Teatralna, No. 142), I looked at the language and narratives of what I then referred to as “plays/films”. I also mentioned the controversy that bubbled up in the Polish theatre and film circles over the form and generic status of the productions, including the inconsistent treatment of the plays produced by Wytwórnia Filmów Dokumentalnych i Fabularnych [the Feature and Documentary Film Studio] by the selectors of the Dwa Teatry [Two Theatres] competition. I do not want to rehash my arguments from three years ago, so I will only repeat my conclusion that the plays have a “cinematic quality”: Teatroteka productions are the kind of shows that Polish Television Theater (Teatr Telewizji; now a shadow of its former self) would produce today.

With the festival in its fourth year, the controversy I mentioned above is now a distant memory. Teatroteka has become a part of the Polish theatre landscape, but one can’t fail to see a certain trend emerging: the first Teatroteka (2017) included 25 adaptations of Polish dramatic works, the second (2018) and third (2019) ten each, while this year there are just eight. To be sure, in 2017 we saw shows that had been produced since 2013 ‒ the best of contemporary Polish drama. Inevitably, the editions that followed were more modest in scope, but the program of this year’s Teatroteka proves, in my view, that the format is experiencing a crisis. This, perhaps, will prompt its creators to make some changes, like turning the event into a biannual affair to showcase more plays and, as a result, have more variety.

Quite understandably, the top prize of the festival went to the female creators of the production of Marta Guśniowska’s A niech to Gęś kopnie! [Literally “may the goose kick it” which is used in a similar context like “I’ll be the monkey’s uncle”], directed by Joanna Zdrada ‒ to its directors, set designers, costume designers and make-up artists. Agnieszka Przepiórska (Goose) and Arkadiusz Janiczek (Fox) took home awards for Best Lead Actress and Actor, with Łukasz Lewandowski (Narrator) recognized for Best Supporting Performance. A niech to Gęś kopnie! is one of three productions in this year’s Teatroteka Młodego Człowieka [Young People’s Teatroteka] section. The other two are Maria Wojtyszko’s Królewna Logorea [Princess Logorea] directed by Justyna Łagowska, and Malina Prześluga’s Dziób w dziób [Beak to Beak] directed by Magdalena Małecka-Wyppich. Teatroteka creators view them all as pioneering but, as I see it, they are just three great TV theatre shows for children ‒ of high artistic merit but not innovative. In my book, these three plays are much more interesting than the other five, intended for adult audiences.

All the Young People’s Teatroteka plays are excellently produced and full of bravura performances. Based on Marta Guśniowska’s widely produced and awarded play, A niech to Gęś kopnie! is the story of a poet goose who goes on a quest for the meaning of life but fails to find it. She secretly lives in a henhouse suffering from depression and poor appetite. When the chance to depart this life comes her way, she jumps at it and offers herself up for dinner to the Fox. In other words, the Goose, who thinks of herself as unloved and useless, decides to commit suicide. Apart from the meticulously built sets (the forest really resembles a forest, and the foxhole TV with an antenna brings up nostalgic memories for not-so-young audience members), I liked the brilliant make-up (Sonia Bohosiewicz looks convincing as Lady Hare) but even more, I liked the detachment of the narrative voice. The detachment is already there in the text of the play, but the director cranks it up with the camerawork, characters’ directly addressing the audience and, above all, the figure of the Narrator. As in the text of the play, the Narrator acts as a guide to the story, but he becomes an oddball combination of low-budget interventionist TV show reporter and nature filmmaker who, like David Attenborough, shows us nature’s beauty, this time in a slightly more complex way, more thriller-like and romantic. With the excellent turns by Przepiórska, Janiczek, Lewandowski and Krzysztof Dracz (The Wolf), the (seemingly) simple story of seeking the meaning of life is poised to enchant the young and old alike.

What do the Goose and Princess Logorea (Monika Frajczyk) have in common? They both seek their place in the world, but the king’s daughter’s world is limited to her father’s kingdom. The princess would like to rule or, more precisely, to not be excluded from succession due to being a women. Besides, she is a bit lonely because King Honorariusz [Honorarius] (Tomasz Schimscheiner) and Queen Biżuteria [Jewellery] (Dorota Landowska) are self-absorbed and immersed in their hobbies such as sugarcraft. They try hard to find a successor to the throne because, obviously, the princess can become at most a King’s wife, not a ruling Queen. Maria Wojtyszko’s Królewna Logorea i Niedźwiedź[Princess Logorea and the Bear], directed by Justyna Łagowska, delights with its unorthodox sets: the geometric, almost empty palace interiors are like a game of imagining a castle, while the individual trees a game of imagining a forest. The director and set designer (together with Natalia Horak), Łagowskadoes not choose to stage the fairy-tale world in an old-fashioned way, which seems a reasonable strategy: instead of a poor excuse for a castle (the budgets of Teatroteka’s productions are modest) what we see is a sign, a suggestion. I liked the way Wojciech Suleżycki’s camera moves: it captures the vast palatial spaces and small glades in a way that makes you forget they have been built on a soundstage. Plus, Łagowska gives the audience the great pleasure of watching well-known actors in unusual, fairytale roles. In addition to the already mentioned Frajczyk, Schimscheiner and Landowska, the play also features Robert Roth, Piotr Polak, Michał Majnicz, Piotr Żurawski, Sonia Roszczuk, Marta Ścisłowicz, Bartosz Porczyk, Jacek Braciak, Mateusz Łasowski and Maćko Prusak. The leads and supporting thespians turn in excellent and funny performances, and the bit roles are no different. As it happens in fairy tales, at first the princess makes a bit of a mess, which lands her in trouble ‒ she has to go through a number of trials ‒ but her courage and nobility help her emerge victorious. She peacefully takes over the throne so that her loved ones (including the friends she made during her dramatic adventures) can do whatever they can and like.

Łagowska’s show is a good one because of its exquisite directing and acting, but also, just as importantly, because it plays with fairy-tale conventions. The creators of Young People’s Teatroteka productions exploit a variety of narrative approaches, aware that modern-day fairy tales are different in form than those even twenty years ago. I also liked the adaptation of Malina Prześluga’s Dziób w dziób in which the director highlights the theme of the lost brother of Przemek the Sparrow (Filip Orliński). In the play’s finale the protagonist recovers from a trauma he suffered in the past ‒ he forgives himself for accidentally pushing his brother out of the nest. The pigeons in the show not only rap but also carry themselves like real hip-hop artists. They rule the roost in the small grey backyard sometimes visited by Dolores the Cat (great Marta Malikowska). Most importantly, however, they manage to get over their own mental stereotypes and overcome their birdly xenophobia.

What the creators of the ‘adult’ Teatroteka lack is a sense of form (or of its exhaustion). This year’s five productions (Wojciech Tremiszewski’s Kasa, dir. Filip Gieldon; Szymon Jachimek’s Matka Boska Niespodziewana, dir. Maciej Buchwald; Karol Lemański’s O człowieku, który siedział tyłem, dir. Maciej Wiktor; Malina Prześluga’s Pustostan, dir. Tatjana Logojda; Waldemar Pasiński Żona łysego, dir. Tomasz Jeziorski) held little interest to me. Yes, Teatroteka has excellent actors, so the shows are well acted, but I felt that this year’s propositions were derivative in their narrative approaches, in the use of the film medium and, finally, in their subject matter. Kasa [Dosh] is a story about a housewife (Agnieszka Skrzypczak) overwhelmed by everyday life. Her husband earns a good salary, and she fantasizes about what would happen if… Identity problems are also explored in O człowieku, który siedział tyłem [The Man Who Sat with His Back Turned] where a Millennial, Artur (Jakub Zając), swaps real life for virtual reality. Pustostan [Empty Home] shows a contemporary family in crisis, and Matka Boska Niespodziewana [Our Lady of the Unexpected] follows a teacher from Sanok (Cezary Kosiński) as he mourns the loss of his wife, with Maria (Agnieszka Podsiadlik), who claims to be Mary, mother of Jesus, helping him through his grief. In the intimate psychological drama Żona łysego [The Bald Man’s Wife], Aleksandra Konieczna and Sławomir Orzechowski portray a childless couple. The two characters are excellently defined but not fully developed ‒ the misfortune of the woman who wanted to be a mother is drawn too sketchily during the mere 42 minutes of the play.

This year has brought us three excellent Teatroteka productions for young audiences. All in all, this offers hope that the whole festival will evolve and grow, not only its children’s section. It would be unfair to criticize a long-running, really interesting project judging it by only one edition.

Olga Katafiasz – theatre and film studies researcher. Dean of the Drama Directing Department at AST. In 1995-2008 in the editorial team of Didaskalia. Gazeta Teatralna.

Inside Virtual Rooms
Back to top